Labeling a sparse covering of a De Bruijn graph, and utility thereof

So far, in this week of khmer blog posts (1, 2, 3), we've been focusing on the read-to-graph aligner ("graphalign"), which enables sequence alignments to a De Bruijn graph. One persistent challenge with this functionality as introduced is that our De Bruijn graphs nodes are anonymous, so we have no way of knowing the sources of the graph sequences to which we're aligning.

Without being able to label the graph with source sequences and coordinates, we can't do some pretty basic things, like traditional read mapping, counting, and variant calling. It would be nice to be able to implement those in a graph-aware manner, we think.

To frame the problem, graphalign lets us query into graphs in a flexible way, but we haven't introduced any way to link the matches back to source sequences. There are several things we could do -- one basic idea is to annotate each node in the graph -- but what we really want is a lightweight way to build a labeled graph (aka "colored graph" in Iqbal parlance).

This is where some nice existing khmer technology comes into play.

A much underappreciated part of the paper is buried in the Materials,

The background is that we were dealing with extremely large graphs (30-150 billion nodes), and we needed to exhaustively explore the graphs in order to determine if any given node was transitively connected to any other node; from this, we could determine which nodes belonged to which components. We didn't want to label all the nodes in the graph, or traverse from all the nodes, because this was prohibitive computationally.

To solve this problem, we built what I call a sparse graph covering, in which we chose a subset of graph nodes called "tags" such that every node in the graph was within a distance 'd' of a tag. We then used this subset of tags as a proxy for the graph structure overall, and could do things like build "partitions" of tags representing disconnected components. We could guarantee the distance 'd' by using the reads themselves as guides into the graph (Yes, this was one of the trickiest bits of the paper. ;)

Only later did I realize that this tagging was analogous to sparse graph representations like succinct De Bruijn graphs, but that's another story.

The long and short of it is this: we have a nice, simple, robust, and somewhat lightweight way to label graph paths. We also have functionality already built in to exhaustively explore the graph around any node and collect all tagged nodes within a given distance.

What was missing was a way to label these nodes efficiently and effectively, with multiple labels.

Soon after Camille Scott, a CS graduate student at MSU (and now at Davis), joined the lab, she proposed an expansion to the tagging code to enable arbitrary labels on the tags. She implemented this within khmer, and built out a nice Python API called "labelhash".

and then query labelhash with specific sequences:

where 'labels' now contains the labels of all tags that overlap with 'query', including tags that are within an optional distance 'dist' of any node in query.

Inconveniently, however, this kind of query was only useful when what you were looking for was in the graph already; it was a way to build an index of sequences, but fuzzy matching wasn't possible. With the high error rate of sequencing and high polymorphism rates in things we worked on, we were worried about its poor effectiveness.

This is roughly what it looks like, once you've built a labelhash as above. First, run the query:

and then retrieve the associated labels:

...which you can then use with a preexisting database of the sequence.

Why would you do any of this?

If this seems like an overly complicated way of doing a BLAST, here are some things to consider:

One use case that is not well supported by this scheme is labeling all reads - the current label storage scheme is too heavyweight to readily allow for millions of labels, although it's something we've been thinking about.

We've implemented a simple (and, err, somewhat hacky) version of this in make-index.py and do-align.py.

To see them in action, you'll need the 2015-wok branch of khmer, and a copy of the prototype (https://github.com/dib-lab/2015-khmer-wok4-multimap) -- see the README for full install instructions.

and you should see something like this (output elided):

showing that we can correctly assign reads sampled from randomly constructed genomes - a good test case :).

We can also index a bunch of bacterial genomes and map against all of them simultaneously -- target 'ecoli' will map reads from E. coli P12B against all Escherichia genomes in NCBI. (Spoiler alert: all of the E. coli strains are very closely related, so the reads map to many references!)

It turns out to be remarkably easy to implement a counting-via-mapping approach -- see do-counting.py. To run this on the same RNAseq data set as in the counting blog post, run build the 'rseq.labelcount' target. 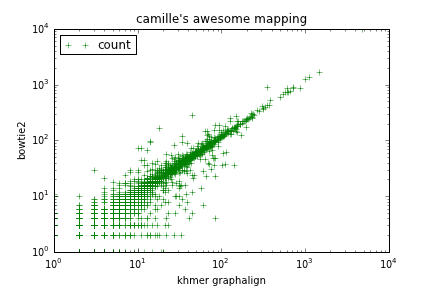 Flaws in our current implementation

The computational results in this blog post are Rather Reproducible (TM). Please see https://github.com/dib-lab/2015-khmer-wok4-labelhash/blob/master/README.rst for instructions on replicating the results on a virtual machine or using a Docker container.