I've spent the last two weeks out at the Roscoff Statione Biologique in Roscoff, France. This little port is on the northern coast of the French region of Bretagne, or Brittany. I'm here with Billie Swalla, a professor at UW Seattle, and Elijah Lowe, a Computer Science PhD student from Michigan State.

Why are we here? Therein lies a tale, about tails.

Roscoff is the only place in the world where you can find two particular species of ascidians (that is, members of the Tunicata (Urochordata), the phylum currently thought to be most closely related to the vertebrates). These two species are named Molgula occulta and Molgula oculata. In their adult form, they look very similar: they are little sessile blobs sitting on the ocean floor, covered in sand, happily filter feeding for a living. The only apparent difference is that M. oculata has a white spot between its two siphons, is a little bit bigger, and likes to cover itself in lighter sand and bigger rocks. 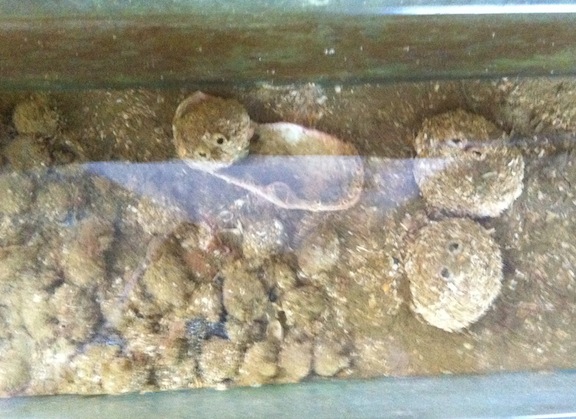 Caption: This picture is of M. oculata; you can see the big 'uns on the right, with two clear siphons. You can't see the white spot between them, however.

When you look at ascidian embryos and larvae, however, you get a very different picture. While the adults superficially look nothing like chordates, the embryos have a characteristic chordate development (including the rolling up of the neural tube) and the larvae generally have a notochord and tail. This is one of the reasons that ascidians are so interesting to evolutionary biologists: by their embryos they are clearly chordates, and share relatively recent ancestry (~550-800m years) with vertebrates, yet they have a lifestyle -- active juvenile and sessile adult -- shared only by tenured professors.

So these Molgula are ascidians, with tadpole larvae. And some of them have tails. But many do not. That is, while almost all ascidian larvae have tails, and the last common ancestor of the Molgula almost certainly did as well, many of the Molgula species do not have a tail -- and that's why we're in Roscoff.

M. oculata and M. occulta larvae are, respectively, tailed and tailless. Otherwise very similar in early development and after metamorphosis, the oculata larvae (hence "tailed") have tails, while the occulta larvae (hence "tailless") do not. M. occulta (tailless) are also missing an otolith, a gravity-sensing organ present in M. oculata (tailed) that one would presume is useful during their motile phase. 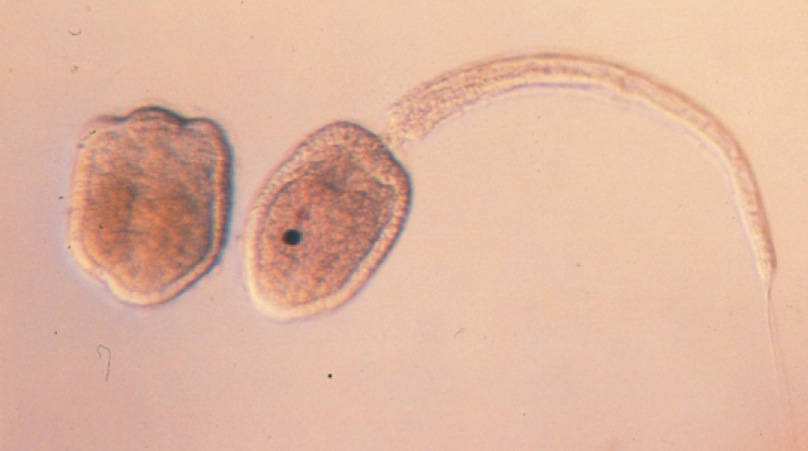 Caption: M. occulta (left) and M. oculata (right) larvae. Note the lack of a tail and an otolith (dark spot) on the left, tailless larva.

So here we have two species, quite closely related, living in similar if not overlapping environments, developing along similar timelines, with quite distinct morphologies in their tadpole larva phase. But that's not all.

The icing on the cake is this: you can interbreed the tailed and tailless species. That is, M. oculata sperm can fertilize M. occulta eggs, and vice versa. (The details are a bit tricky because ascidians are hermaphrodites, M. oculata can self-fertilize, and M. occulta cannot. So you have to be really careful during the fertilization stage But never mind.) And what do you get when you hybridize them? Little tadpole larvae that have a half-size tail, with 20 notochord cells instead of 40; and an otolith. 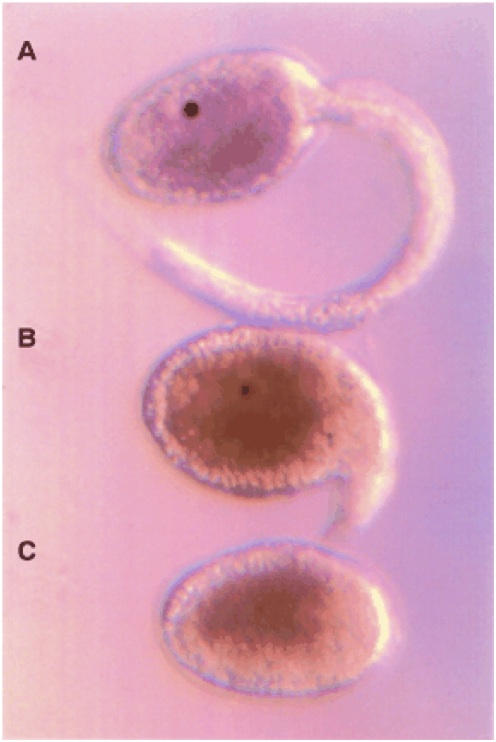 Let me stress that we had no a priori reason to believe that by crossing tailed and tailless species, we would get a half-tail. That would be like a child with brown hair having a blonde parent and a black-haired parent -- traits don't always average. In fact, while you could guess that the hybrids might have a tail, it would be equally likely (given no other information) that they would have no tail, or a full-length tail (blonde or black hair, rather than brown).

The fact that hybrids -- from sperm from tailed ascidian and eggs from a tailless ascidians -- have a tail at all is pretty surprising, and suggests (Occam's Razor and all that) that the molecular mechanism underlying tail-less-ness is some sort of loss in the genome. This is a decent guess mainly because sperm tend not to have too much in the way of RNAs or proteins in them: their main contribution to the embryo is the daddy genome. If, in contributing their genome, they induce a trait that was lost in the mommy genome, it is pretty plausible that they are doing so by re-adding in a genomic locus that was mutated or lost in the mommy genome. But we really don't know; understanding things at that level of molecular detail is a pretty difficult thing to do.

All of this is old hat, in fact, with the hybrids most recently published on by Swalla and Jeffery in the late 1990s. (Yes, that is the same Swalla, of course.)

So, what are we doing? And why I am I involved?

I'll give you a hint -- it involves large-scale sequencing.